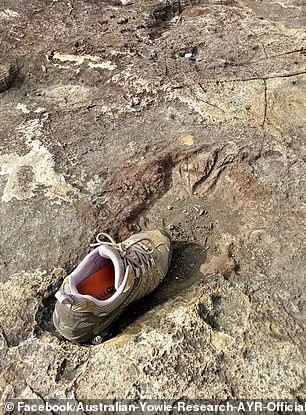 A family say they are living in fear as they claim they’re being terrorised by a yowie which lurks around their home.

In a report to yowie hunter Dean Harrison, the Gold Coast family say they are contemplating leaving their Currumbin Valley home and claim the mythical beast has been regularly visiting since last November.

The alleged sightings comes a week after Australian Yowie Research Page shared a picture of an ‘unusual looking’ footprint in sedimentary rock in South East Queensland.

Bushwalkers Laura and Gary spotted the unnaturally large marking – which is more than double the size of a standard shoe – on Mt French along the Scenic Rim on July 7.

The Currumbin Valley family claimed the first sighting happened one Sunday evening about 9.30pm when the mother was sitting on her back deck, Gold Coast Bulletin reported.

She heard loud noises in the bush which she claimed were ‘clear’ footsteps.

‘I moved to the railing to get a closer look and there I saw it,’ she wrote to Australian Yowie Research.

‘As it was walking, I bumped something on the deck, the noise stopped it dead in its tracks, it turned from the waist, looked in our direction and snorted loudly and quickly twice – it was huge.’

The woman then ran into the house and turned off all the lights.

‘I just stood there staring out in pure terror shaking and afraid. This massive thing was so close to the house,’ she wrote.

The creature returned the following night and made gorilla-like sounds, she said.

The woman’s husband and her two children have also seen the yowie, according to her report.

Their latest encounter, on Thursday July 11, saw a dog bowl being flung at the house, the woman said.

The family’s 10-year-old son is not allowed outside by himself because they’re concerned about him becoming ‘petrified’ again.

Mr Harrison, the man behind the Australian Yowie Research website, has dedicated his life to chasing yowies after caliming he first came across the mythical beast in 1995.

‘I wanted answers,’ he previously told Daily Mail Australia. And he was determined to get them.

Over the past 25 years Mr Harrison claims he has had several encounters with the ape-like creatures, which are similar to the Sasquatch or Bigfoot in the United States.

There have been thousands of reported sightings of the nocturnal creatures in Australia over the past century, he said.

Mr Harrison was living at a rural property in Eagle Heights in South East Queensland when he claims he first spotted one.

‘I came home and there was this thing in my backyard. It was massive and standing on two feet. It was growling and it was ripping out the foliage.’

Mr Harrison was curious and considered grabbing a torch and going outside to investigate but he was too scared. Instead, he locked the doors and watched from the window.

Mr Harrison has spent the past two decades searching for the creatures.

He now has a team who he works with that goes in search of yowies once they have been reported.

It’s a tireless job that has taken him across the country.

‘We hear stories from all sorts, doctors, lawyers, harden people – big burly guys get in touch, truck drivers and that. They don’t believe it and then suddenly their world is changed.’

The Blue Mountains, in New South Wales, has a high number of Yowie sightings, followed by the Sunshine and Gold coasts in Queensland.

The first reported sighting was in Sydney in 1790, there were a number of other sightings reported in the area in the preceding decade.

Mr Harrison believes there are two types of Yowie species in Australia. The larger stands at around 6-10ft tall. The smaller species stands about 4-5ft tall.

The Yowie, also known as the Australopithecine, is believed to have walked to Australia from Asia on ‘land bridges’ during the ice age. 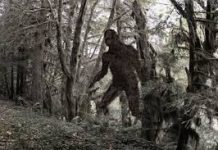