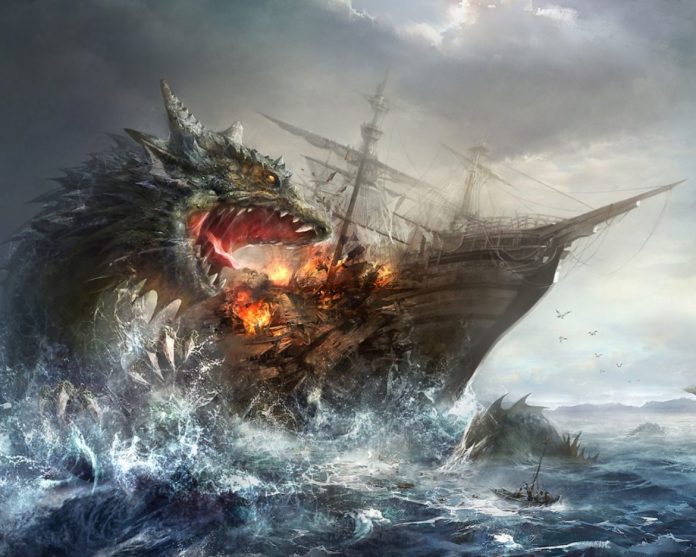 There are tons of mysterious places around the world both on land and in the water – that are difficult to explain logically. The legends of missing vessels and ghost ships drifting without its crew in these locations have made them synonyms to the mystery. Though the notorious Bermuda triangle tops the list of most mysterious places on this planet, a number of other locations also remain mysterious as much as the former. The Devil’s Sea, also known as the Dragon’s Triangle, is one of such sailors’ nightmares in the waters around the world.

Located near to the Japanese coast in the Pacific Ocean, the Devil’s Sea (Ma-no Umi in Japanese) is one of the twelve Vile Vortices located around the earth. Vile vortices are those areas where the pull of the planet’s electromagnetic waves is stronger than anywhere else. As the title indicates, the Dragon’s Triangle extends as a triangle between Japan and the Islands of Bonin, including a major portion of the Philippine Sea.

The area has also been called the Pacific Bermuda Triangle, denoting its position that is precisely opposite to the Bermuda Triangle and the similarities in the “paranormal phenomena” of the area with that of the Bermuda Triangle. Such an infamous reputation for this oceanic area has been not gained contemporarily but exists for decades and even centuries if some records are to be believed. The area has been in news for several decades for unexplained incidences of the vanishing of ships. According to the legends, the waters of the triangle are notorious for making even the strongest vessels disappear, along with the crew abroad.

Notable Events in the Devil’s Sea

It is said that the conqueror Kublai Khan, the fifth Great Khan of the Mongol Empire and the grandson of Genghis Khan, had tried to make inroads into Japan in 1274 and 1281 AD. However, on both attempts, he failed to invade the country after losing his vessels and 40,000 crew members abroad in this triangular area, reportedly due to typhoons.

As Kublai Khan and his army abandoned the plan to invade Japan, the Japanese believed that it’s the God who sent the typhoons to save them from the enemies. Later, strengthening the truth behind the legend, the divers and marine archaeologists have found the remaining of the Mongol fleets from the region.

Another story doing the rounds tells the sighting of a mysterious lady sailing a vessel in the Devil’s sea in the early 1800s. It is said that the vessel resembled the traditional Japanese equipment for burning incense. However, the destination and identity of the vessel still remain as a mystery.

In the later century, especially in the 1940s and 1950s, a number of fishing vessels and over five military vessels were disappeared in the sea, in an area that lies between Miyake Island and Iwo Jima. As a result, Japan sent a research ship named Kaio Maru No.5 in 1952 to investigate about the previously missing vessels that had been reported to have gone missing in the Dragon’s Triangle without any trace. However, the research vessels with 31 crew members abroad also met the destiny of previous vessels which went to the Devil’s sea. The wreck of the Kaio Maru No.5 was recovered later, but the whereabouts of the crew members were never heard of again. Following this incident, the Japanese government reportedly declared this area dangerous for marine voyaging and transporting goods. Moreover, as a result of this unprecedented incident, all efforts to unearth the facts behind the mystery were also aborted completely.