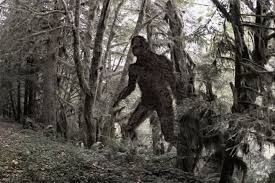 Yowies are a species of Bigfoot-like apes said to inhabit the Australian Outback.Yowie-type creatures are common in Aboriginal Australian legends, particularly in the eastern Australian states. Usually described as tall and stocky, and covered head to foot in thick black or dark red fur.  The creature standing upright is between 2.1 m (6 ft 11 in) and 3.6 m (12 ft). The yowie’s feet are described as much larger than a human’s, but alleged yowie tracks are inconsistent in shape and toe number, and the descriptions of yowie foot and footprints provided by yowie witnesses are even more varied than those of bigfoot. The yowie’s nose is described as wide and flat. Most accounts of yowie sightings claim the creatures are shy and very easily spooked, although some tales claim they can be confrontational and can produce a bloodcurdling scream when threatened. Nowadays, the creatures are generally considered a myth, but in the 19th century, sightings were remarkably common, to the extent that in 1892 an Australian amateur adventurer and scholar named Herbert J. McCooey—who had supposedly spotted a yowie near Bateman’s Bay in New South Wales several years earlier—wrote to the Australian Museum in Sydney, offering to capture one of the creatures for a fee of £40 (around US$3000/£1,800 today). He failed.