This video took place in Turkey.. The man in the video says that when he was going back to home after closing his shop someone tapped his shoulder and said “look behind you” when he turned around he saw the ladder(?) thing coming towards him, he tried to dodge but he thought he couldn’t because it just kept coming towards him. He ends up dodging it and looked for his savior but couldn’t see him anywhere. He says, he just vanished in the dark. It is believed that this is a video of a man from the future saving himself. 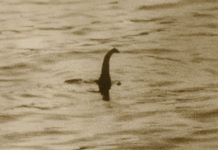