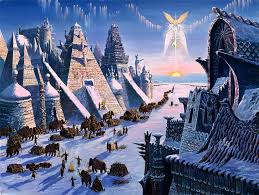 The Lemuria legend is interesting because geologists have confirmed that large sections of land mass formerly connected to Asia were indeed submerged thousands of years ago. The largest chunk of such submarine real estate is known as Sundaland,

Sundaland formerly connected mainland Southeast Asia with Indonesia. Nearly all the islands of Indonesia formed one great land mass extending to Palawan in the Philippines. By the time the Holocene period was over 8,000 years ago, Southeast Asia had lost well over half of its surface area. Island groups in the Philippines and Eastern Indonesia were also formed during this period.

What makes this pertinent to the Lemuria myths is that the whole region of Sundaland and the neighboring islands were believed to have been populated before the ocean levels began rising. Not only populated, but rather relatively densely populated. Scientists have determined this by studying the current population levels along the “Asian waterfront” and also by evidence of extensive land clearance in early times.

During the 1930s, James Churchward made the legends of Lemuria known to the public after he studied the extensive myths of peoples living from India in the West to Hawai’i in the East.

For example, the old Tamil Sangam tradition contradicts modern theories that the Tamils were driven into South India by invading Aryans. Tamil legend states that they came from a sunken continent somewhere south of India.

Similar beliefs are dispersed throughout the equatorial Asia Pacific region.

If Sundaland and nearby regions were as heavily populated in pre-Holocene times as some specialists believe, the rising sea levels must have cause massive migrations.

Buckminster Fuller, a noted engineer and futurist, formulated a theory that the great voyages of the Malayo-Polynesian peoples were stimulated by whole populations losing their land to the sea.

Fuller was followed by Thai ethnographer Sumet Jumsai who correlated a mass of beliefs along the Asian waterfront and the Pacific and theorized that they belonged to the migrating peoples of sunken Sundaland.

The overall argument is rather reasonable. Although the drowning of Sundaland occurred over many thousands of years, during some periods sea levels rose rather drastically. The Holocene era saw such a dramatic rise.

The experience of relatively large numbers of peoples driven from their homelands by rising seas would definitely leave a mark on the collective psyche and cultures of these peoples.

Although the legends of Lemuria have been used by New Age types to devise various far-out theories including those involving extraterrestrials, the case of Sundaland argues that there may well be more behind these legends than a pure myth.