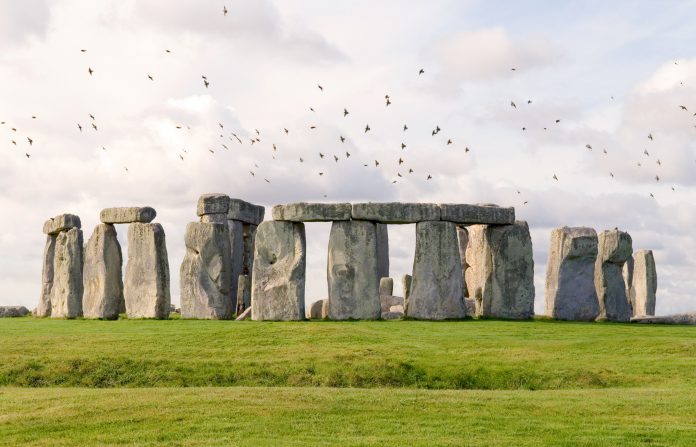 Stonehenge is one of the most famous sites in the world.  Stonehenge comes from the old English word stān meaning “stone”, and hencg meaning ”hinge” because the stone hinge on the upright stones.

No place has generated so much speculation and wild theories as the standing stones of Stonehenge. After driving for miles through the rolling hills and plains of the English countryside the sight of this unusual structure makes people gasp. A walk around it only provokes more strange feelings. There’s a sense that this is something very important. It taunts us with it’s mystery. For over 5000 years it has stood silent vigil over the earth. It has been excavated, x-rayed, measured, and surveyed. Yet despite all that has been learned about its age and construction, its purpose still remains one of the great mysteries of the world.

Around 3500 BC the semi-nomadic peoples that populated the Salisbury Plain began to build the monument now known as Stonehenge. The original construction was a circular ditch and mound with 56 holes forming a ring around its perimeter. The first stone to be placed at the site was the Heel Stone. It was erected outside of a single entrance to the site. 200 years later 80 blocks of bluestone was transported from a quarry almost 200 miles away in the Prescelly Mountains. It is surmised that these blocks were transported by way of rafts along the Welsh coast and up local rivers, finally to be dragged overland to the site. These stones were erected forming two concentric circles.

At some point this construction was dismantled and work began on the final phase of the site. The bluestones were moved within the circle and the gigantic stones that give Stonehenge its distinctive look were installed. Some of these massive stones weigh as much as 26 tons! It remains a mystery how such huge stones could have been moved from the quarry at north Wiltshire by a supposedly primitive people.

Although it’s probably a futile effort, it is sometimes very intriguing to try to understand the motives behind the building of a monument such as Stonehenge. If the builders are somewhat a mystery to us, then their reasons to build Stonehenge are absolutely outside our scope of knowledge; we can only make educated guesses based on assumptions, so there is no way we could say that some idea is better than other. Here comes some thoughts on the subject.

Many researchers have argued, who more convincingly than others, that Stonehenge was a site of religious rites of its time. There are several good reasons behind this assumption, but unfortunately it only takes one aspect of the theory that cannot be proven to collapse the whole train of thought. Remains of pig bones found on the site emphasize the theory of religious site, because no pig skulls were found among the bones. This means that the animals had to have brought to the site ready to cook (=beheaded), which would most likely have been done for the sake of the gods or the clergymen (or both).

This actually doesn’t deny the “religious site” scheme (just the opposite), and it is almost as sure as something can be in history that Stonehenge has been used as a site for religious rites at least some point of its history. Now the wild-minded readers may get the impression of brutal human sacrifice rites, and while some evidence have been found to back this, there are no signs of continuous use of megalithic sites as sites for human sacrifice. Animals and such have almost certainly been involved, though. What neither of the previous tell us, is that was religion or sacrifice the initial reason to build Stonehenge, or was it something else? This derives from the fact that no verbal nor written heritage has survived through the times about the ideas and motives of those Neolithic tribes (and of course from the fact, that we cannot go back in time to ask them…).

The facts tying Stonehenge to astronomy aren’t foolproof, but some at least very interesting points have been made in several studies of this topic. Probably the best known study of “astronomical Stonehenge” is Gerald Hawkins’ “Stonehenge Decoded”, for which he used a modern computer to calculate all the sight-lines (line of sight from one point in Stonehenge to a body of sky via landmarks such as stones) and their relation to objects of sky, mostly the Moon and the Sun, though.

The “modern man” must keep in mind, that things may not be what they first seem to be. Being very close to earth and nature, not much unlike the close-to-nature cults today, the Neolithic Britons might have held objects of the sky as gods, and predicting the will of the gods was something essential to their existence, thus mixing the concepts we distinguish from each other today – religion and astronomy.

Hawkins and also Fred Hoyle stated that not only Stonehenge was used as observatory, it was also used to keep records and predict astronomical events, such as eclipses. Let’s look at these possibilities a little closer.

If those ancient people really thought that the Sun and the Moon are gods, did they build a site where they could observe and worship their gods? There is a good possibility that this is the case, when viewed the characteristics of Stonehenge. For starters, there is a good view to the skies from the middle of the plain, there are no major obstructions to the field of vision, but then again, such is the case in many other places around southern England and Wiltshire, places that might have been more easily maintained and constructed.

According to the studies of other megalithic sites, the circular banks around sites could have been made to smoothen the horizon by elevating it a bit. If this was the case, there is no reason to think that the bank around Stonehenge would have been made for any other reason. On the other hand, this is just an assumption based on other sites that have higher banks around them.

Only problem is that there are quite a lot of this kind of sight-lines. If one is to use only the Aubrey Holes, with variations of technique a total of over 100 sight-lines can be defined. If the point of observation is shifted from the center of the ring to, say next to a sarsen, possible sight-lines increase considerably. In fact it would be more amazing, if the sight-lines didn’t match with some important astronomical direction.

The big sarsens could also have been used to determine sight-lines.

With the astronomical connection, it didn’t require an enormous leap of imagination to think that Stonehenge was used to also predicting events of the night sky. Hawkins and Hoyle developed their own methods to predict lunar eclipses with the construction of Stonehenge, which consisted of record-keeping with the help of the Aubrey Holes and movable marker stones or wooden logs. These theories are quite accurate, and the only flaw with them is the fact that they require rather high degree of astronomical and mathematical knowledge, in conjunction with records covering at least nearly twenty years. These records would have had to be passed without written records (since we assume there are none, because we haven’t found any), and a society of high mathematical and astronomical skills without the wisdom of writing… well, let’s just say that it doesn’t add up properly.

If there is one to be made, it is that we don’t know much anything, which is exactly as much as we did know before. Whereas it’s disputable to claim that Stonehenge was used to predict or even observe astronomical events, it is quite obvious that those Neolithic people who started to build Stonehenge did place great importance to their gods – mainly the Sun and the Moon and if the megalith in the middle of Salisbury Plains wasn’t exactly built for sky worship, it was probably built with a certain amount of honor to the unknown.