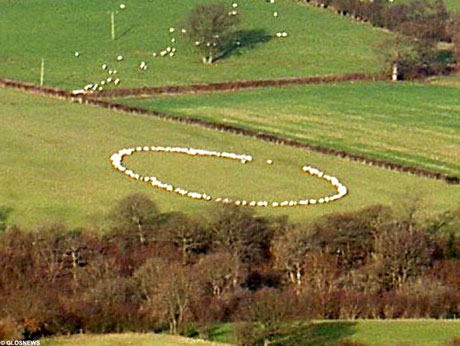 Photographer Russell Bird captured this mysterious structure known as the sheep circle. On January 25, 100 plus sheep formed a near-perfect circle in Hertfordshire, England. The circle lasted ten minutes, ending when a farmer drove a tractor into the field.

There was strange goings-on at the farm today when a flock of sheep made their own version of a crop circle.

About 100 of the woolly creatures formed an orderly ring – baffling the farmer and passers-by.

But after hearing the roar of the boss’s tractor the animals scattered like a group of naughty schoolboys.