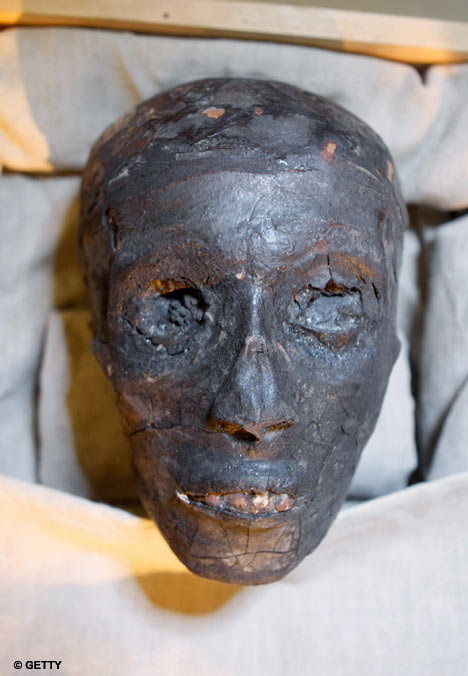 When Howard Carter and Lord Carnarvon opened the tomb of Tutankhamem they set off a chain of mystery. Several of those connected with the discovery died violent or unusual deaths- victims of the so-called Pharaoh’s curse.

The sinister superstition is based on unconfirmed reports of a chilling series of happenings on the very day when the two archeologists and their party had first penetrated the entrance to the tomb in November 1922.  As the last man climbed back into the sunshine a sandstorm is said to have sprung up and swirled over the mouth of the cave. As it died away, a hawk, the royal emblem of ancient Egypt, was allegedly seen soaring over the tomb to the west-toward the mysterious “Other World” of Egyptian belief.  The spirit of the dead Pharaoh, said superstitious people had left his curse on those who had violated his tomb.

Five months later Lord Carnarvon, then 57, was bitten by a mosquito on the left cheek.  The bite became infected, and weakened by blood poisoning, he contracted pneumonia.  As he died in a Cairo hotel at 1:55 a.m., all the city lights went out.  At the same time, back home in England, Carnarvon’s dog howled-and died.

Strangest of all, Doctors who later examined Tutankhamen’s mummy reported finding a scablike depression on a spot on the left cheek corresponding to the location of Carnarvon’s mosquito bite.

The curse was blamed also for the deaths of several others who had visited the tomb.  For example, Carnarvon’s half brother, Aubrey Herbert, died of peritonitis.  An Egyptian prince, Ali Farmy Bey, whose family claimed descent from the Pharaohs, was murdered in a London hotel, and his brother committed suicide.  George Jay Gould, and American railway tycoon, died of pneumonia in France, reportedly after catching a cold in the tomb.  The Hon. Richard Bethell, who helped carter to catalog the treasures, was thought to have committed suicide at the age of 49.  A few months later, in February 1930, his father, Lord Westbury, hurled himself to death from his London apartment.  An alabaster vase from the Pharaoh’s tomb was in his bedroom.  In the seven years after the discovery of the tomb in 1922 a dozen people who had been concerned with it in one way or another died strange deaths.

But one man continued to scoff at the legendary curse of the Pharaoh the one man who might have had most reason to fear it.  Howard Carter died in March 1939-of natural causes.  Yet when Egypt agreed to send the Tutankhamen treasures to Paris for an exhibition in 1966, its director of antiquities, Mohammed Ibraham, dreamed that he would face terrible danger.  He fought the decision up to one last meeting in Cairo with the authorities concerned.  As he left the meeting, he was knocked down by a car.  He died two days later.