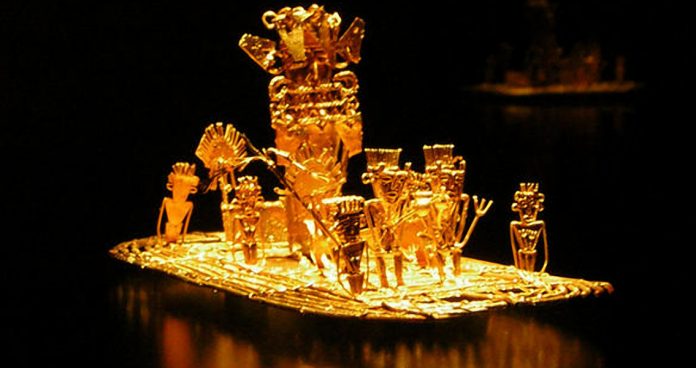 The legend of El Dorado was born in the 16th century when the Spanish arrived in Muisca territory and spread rumors that there was a city of gold somewhere in the Andes mountains. Since then, the myth of El Dorado (The City of Gold) has attracted hundreds explorers and treasure hunters seeking to find their fortune. into the mountains of South

The most representative symbol of the El Dorado myth is the Muisca Raft, an outstanding example of pre-Columbian gold votive discovered in a cave near Bogota in 1856. It belongs to the late period of the Muisca culture, sometime between 1200 and 1500 BC.

The Muisca tribe is one out of four advanced civilizations of the Americas (apart from the Aztec, Mayas, and Incas), best known for their skilled gold working.

The golden sculpture is made of an alloy of pure gold (over 80%) with native silver and a small amount of copper alloy by using the lost wax method and depicts the ceremonial ritual of the new zipa (ruler) of Bacatá at the lake of Guatavita. He is surrounded by other chiefs, all adorned with feathers, pendants, armlets, crowns, and earrings, carrying musical instruments, jaguar masks, and shaman maracas in their hands. The tribe members located at the edges seem to be oarsmen. When a leader died within Muisca society, a new chief was acknowledged, usually the nephew of the previous chief, who used to cover his body in gold dust, and standing at the center of a raft, he offered treasures to the Guatavita goddess in the middle of the sacred lake. This old Muisca ceremony became the origin of the El Dorado legend. The piece is now on display at the Gold Museum in Bogota and maybe the key to the greatest treasure never found.