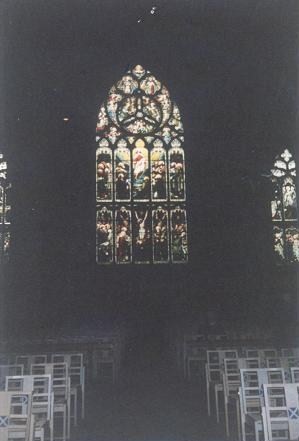 Creech Hill, near Bruton in Somerset, England, was once the site of an ancient Romano-Celtic temple where. Chaeologists uncovered two crossed skeletons, thought to be those of a Norman and a Saxon.  Apparently the scene of brutal confrontations long ago, the area is also said to have a long history of haunting.  A number of people traveling at night over the hill or near it have reported the sounds of heavy footsteps and strange laughter.  And some have told of seeing a black ghostly shape.

One night, it is said, a farmer returning from a nearby market stumbled upon a figure lying in the road at the foot of Creech Hill.  Suddenly the figure rose to a commanding height and let out a bone-chilling shriek.  The terrified farmer fled for home, with the dark specter close on his heels when he burst through his from door and collapsed across the threshold, his stunned wife caught a glimpse of a long black figure bounding away in the direction of Creech Hill, laughing crazily.

In yet another account of the Creech Hill phantom, a man armed with a lantern and a stout hazel stick, ventured across the hill one night to keep an urgent appointment.  Halfway through his journey, he encountered a deadly coldness, and then something tall and black rose up from the ground before him.  Startled, the man struck out at the hideous shape, but the stick passed right through it; he tried to flee but found himself rooted to the spot. peals of maniacal laughter deafened the traveler as he swung wildly at his tormentor again and again.  Not until the first light of dawn appeared did the apparition vanish, leaving its victim free to move once more.