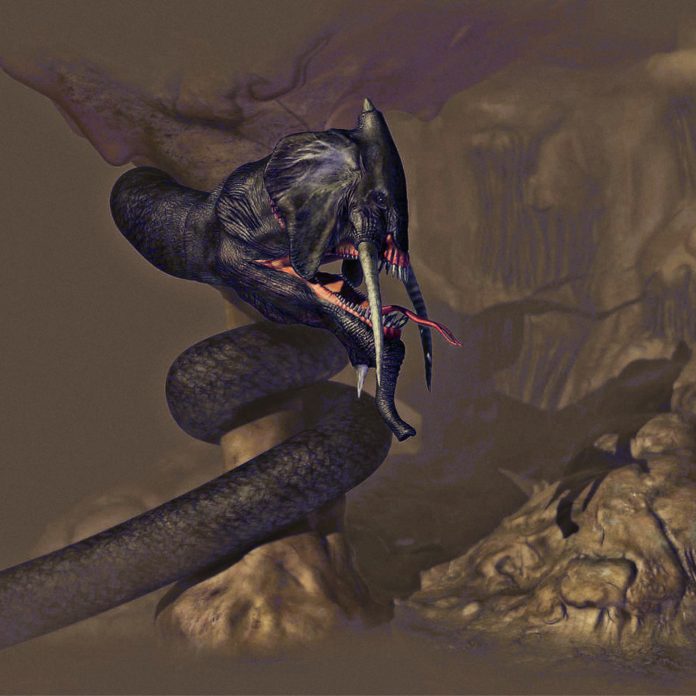 The grootslang, or “great snake,” is a legendary monster said to dwell in the caves of the Richtersveld, a mountainous desert region in northwestern South Africa. In local mythology, grootslangs were primordial creatures comprised of the head and front of an elephant and the back and tail of an enormous serpent. When the Earth was created, the grootslangs were all apparently destroyed, but according to legend, some survived and retreated to the deepest caves of the Northern Cape province. Tales of enormous tusked snakes—probably inspired by real-life sightings of enormous pythons that live in the same area—have rumbled on in South African folklore ever since; the mysterious disappearance of a British diamond magnate named Peter Grayson in the Richtersveld caves in 1917 is sometimes blamed on the grootslang.

The Legend of the Grootslang

According to legend, the Grootslang is a primordial creature as old as the world itself. Tales state that gods, new to the crafting of things, made a terrible mistake in the Grootslang’s creation, and gave it tremendous strength, cunning, and intellect. Realizing their mistake, the gods split the Grootslang into separate creatures and thus created the first elephants and the first snakes. But one of the original Grootslangs escaped, and from this first sire, all other Grootslangs were born. It is claimed to devour elephants by luring them into its cave. The cave is known as the “Wonder Hole” or the “Bottomless Pit”. Supposedly, it connects to the sea which is 40 miles away. According to local legend, the cave is filled with diamonds. It is also said to live in warm rivers and lakes. In Benin, it is said to be a huge elephant-like creature with a serpent’s tail. Also according to the tale, Grootslangs covet gems, particularly diamonds, and despite the creatures’ lust for cruelty, victims can often bargain for their freedom by offering a Grootslang enough precious gems. While searching for treasure in the richtersveld of South Africa in 1917, English businessman Peter Grayson disappeared after members of his party were attacked and injured by lions, prompting legends that the Grootslang had killed him.