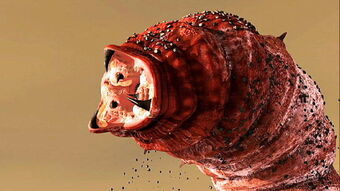 The name olgoi-khorkhoi means “large intestine worm” in Mongolian, but this 4-foot-long subterranean cryptid is more like a giant earthworm than a parasitic tapeworm. Also known less subtly as the “Mongolian death worm,” the olgoi-khorkhoi apparently lives beneath the sands of the southern Gobi Desert, only coming up to the surface in the warmer summer months or when the ground becomes too wet for it to survive. Sightings of the worms date back several centuries amongst the native Mongolians, many of whom claim the olgoi-khorkhoi is able to spit venom or even acid from its mouth, while its body is apparently coated with such a toxic slime that anyone who happens to touch it will be instantly killed.