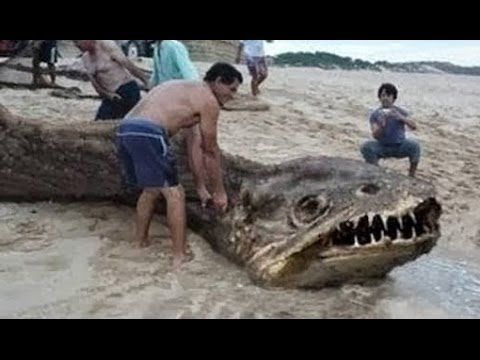 Sightings of these sea monsters have been reported for hundreds of years, and a number of such reports have also emerged in the recent times. Various accounts have appeared about the reptilian sea monsters being seen by seamen in the high seas and also by people near the coasts. While the descriptions of the sea serpent seen by people vary to a certain extent, these descriptions are not without similarities.

A list of some of the more prominent tales of existence and sightings of sea serpents can be mentioned as follows:

• Scandinavian folklore has quite a few documentation of sea monsters swirling in the high seas. One of the many is Carta Marina, a publication of Olaus Magnus, a Swedish priest of the 1500s which detailed the existence of many such sea monsters in the oceans.

• It was in 1639 the first American sea serpent, which later known as “Gloucester’s Sea Serpent,” sighted off the coast of New England near Cape Ann, Massachusetts. According to John Josselyn, who reported this incident in An Account of Two Voyages to New England in 1641, the seafarers encountered a snake that “lay quailed up like a cable upon the rock at Cape Ann.” Three years later, another sighting of a serpent that measures around 27 meters in length was reported near Lynn, Massachusetts.

• An 18th-century description of a sea serpent was given by the national saint of Greenland, Hans Egede. According to him, the crew abroad the ship that was passing the coast of Greenland on July 6, 1734, saw a terrible creature that they have never seen before. The monster was longer than their vessel and had giant fins and small head.

• Another popular sea serpent sighting happened in August 1848, when the crew of the Royal Navy’s HMS Daedalus saw some 18-meter long creature during a voyage to Saint Helena in the South Atlantic. The creature, as the army officers described, held a snakelike head above the water, was later labeled as an elephant seal and giant squid by some others.

• Cadborosaurus Willsi or Caddy is a very popular sea serpent which frequently made headlines in newspaper and reports in the early 20th century. It is said that the creature was anointed with the name for being regularly sighted in the Cadboro Bay in British Columbia.

• A carcass was caught in the fishing mesh of the Kuiyo Maru, a fishing boat native to Japan near the New Zealand coast in the year 1997. This carcass was said to remain belonging to an extinct marine creature known as plesiosaurus.

• Andrew Hebda, a zoologist for the Nova Scotia Museum of Natural History, suggests there have been more than 31 sightings of such sea monsters in the region over the last 140 years. According to Hebda, the latest incident was reported in 2007.

One of the most common threads of similarity between all these sightings is about the length of the serpent at the sea. This commonality has made even skeptics perceive that there could be an underlying element of truth in the widespread speculation of sea monsters existing.